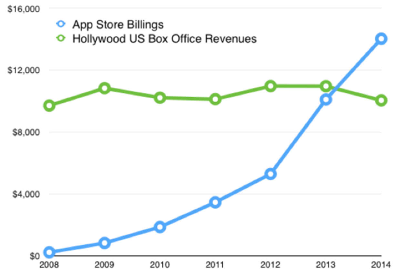 As analyst Horace Dediu pointed out on his Asymco blog, iOS apps drew in more bucks last year than the movie business. Earlier this month, Apple announced iPhone and iPad developers raked in as much as $10 billion in 2014. Tack on the 30% or so that Apple itself made on top, and the roughly $14.3 billion exceeds the $10 billion or so Hollywood made at the U.S. box office.

Its not just the numbers which are astounding, its the meteoric pace at which mobile app development has overtaken the movie business which has shocked observers. As the graph above shows, just 2 years ago the app business was half the size of today. The rapid growth trend shows no sign of slowing down.

The interesting question in my mind is – just how long will Hollywood stay in the movie business, given that the skills required for mobile app development and movie production overlap in so many ways?

What is clear is there is still potential to make a lot of money developing Android apps and developing iPhone apps. And, just as it is in Hollywood, its not always the big production houses which take the prize – there is plenty of room for newcomers to make their mark, and cash in on the multi-billion dollar mobile app development market.