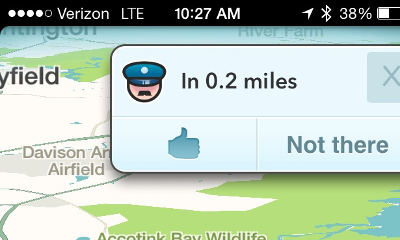 US Sheriffs are campaigning for Google to switch off a feature of their Android app for drivers, which displays the location of police officers on their driving map.

According to The Guardian:

Waze, which Google purchased for $966m in 2013, is a combination of GPS navigation and social networking. Fifty million users in 200 countries turn to the free service for real-time traffic guidance and warnings about nearby congestion, car accidents, speed traps or traffic cameras, construction zones, potholes, stalled vehicles or unsafe weather conditions.

To Sergio Kopelev, a reserve deputy sheriff in southern California, Waze is also a stalking app for law enforcement.

There are no known connections between any attack on police and Waze, but law enforcers such as Kopelev are concerned it’s only a matter of time. They are seeking support among other law enforcement trade groups to pressure Google to disable the police-reporting function. The emerging policy debate places Google again at the center of an ongoing global debate about public safety, consumer rights and privacy.

Waze users mark police presence on maps without much distinction other than “visible” or “hidden”. Users see a police icon, but it’s not immediately clear whether police are there for a speed trap, a sobriety check or a lunch break. The police generally are operating in public spaces.

The Waze mobile app controversy highlights the radical impact mobile apps are having on our lives. Avoiding speed cameras is obviously a very attractive feature for drivers – if nothing else, it helps highlight dangerous stretches of road where they should pay particular care, assuming that speed cameras have been installed with a view to improving public safety. But as the recent deliberate murder of police officers demonstrates, an app which potentially assists deranged individuals to perpetrate crimes is obviously a serious concern.

I don’t know what the right tradeoff is between liberty and safety, though I tend towards the liberty side of the debate. Regardless of police concerns, the threat they have highlighted is hypothetical. There is no evidence anyone has actually used Waze to facilitate a violent crime.

One thing is clear – the original creators of the Waze Android App made 966 million dollars. At the time the app was purchased by Google, nobody had any concerns about possible malicious use of Waze Mobile App features.

In my opinion, the lesson is, if you are evaluating what features to include in your app, do what due diligence you can, with the information available – but nobody can predict every possibility.