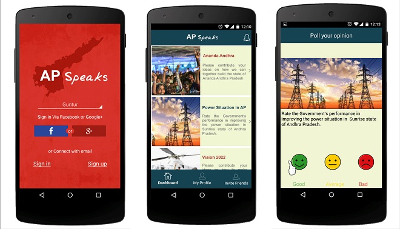 The Indian State of Andhra Pradesh has developed a mobile app to ask people what they think, about a range of government proposals, services and projects.

The Andhra Pradesh government’s response is a bold new experiment in mobile app technology – a mobile app, to give the ordinary people of tech savvy Andhra Pradesh an unprecedented level of oversight, over the progress of their new government.

According to Asia Pacific Future Gov

The app, known as AP Speaks, lists broad areas that the government wants to improve such as education, electricity and tourism. A short description appears alongside each.

People can submit their ideas or like an idea shared by another person under these topics.

The government has also asked them to rate the state’s electricity service as good, bad or average.

Andhra Pradesh has tied up with Facebook and Indian telecommunications company Reliance Communications to make sure people without internet access can use the app as well. Customers of Reliance will be able to access AP Speaks without data charges through the Internet.org Android app or www.internet.org

If you are considering a new communication mobile app, an app for enhancing client feedback, please contact me.

The Palmer United Party has upped the stakes in the Queensland State Election, by claiming that the state government should be doing more to “embrace” innovation and startup companies, to help improve the Queensland economy.

Alan Birrell, who is running for the seat of Townsville, told StartupSmart the LNP’s vision of a four-pillar economy based on agriculture, construction, resources and tourism was missing a crucial fifth pillar: technology.

“We need to add a fifth dimension to our economy and from an innovation base we can put money in the right places and give it to the right people with the right ideas which helps create jobs,” he says.

“I don’t think it’s an easy task, but it is a worthwhile task.”

Birrell says Queensland’s Parliament could do with more entrepreneurial thinkers instead of politicians with a strict ideological view.

“We have far too many politicians who are professional politicians and hence they are very willing to toe the party line rather than be out there with original ideas and concepts,” he says.

As principle of a startup, I’m a little wary of governments intervening too heavily in the market. I don’t have time to navigate the thickets of red tape, to secure a government handout – as Britain has discovered, too much well meaning targeted intervention tends to fill the pockets of organisations which are focussed on milking the system, rather than creating real value.

As The Register reports;

Silicon Roundabout is, essentially, a prank on the media. Let’s see who’s involved. You’ve got what I call faux capitalists – people who want to be thought of as capitalists but are terrified of risk and don’t back ambitious high-risk ventures. You’ve got entrepreneurs who can’t run a business. And you’ve got programmers who can’t program. All looking for each other. Then there’s a vast army of hangers-on: mentors, facilitators. And they all socialise endlessly, instead of doing any work. The socialising is work.

This does not create wealth.

As soon as we start to “un-fetishise” this myth of two guys in a garage, and start to think more seriously about, say, payment platforms or credit systems that make buying stuff nice and easy, as easy as real life, then we’ll create markets. You won’t get this from Shoreditch.

The measures which would really help in my opinion are cost reductions. The great thing about reducing costs is you don’t have to do any bureaucrat chasing to secure the benefit, you just have to get your head down and run your business.

For example, Tax is high in Australia, compared to other Asian startup centres such as Hong Kong and Singapore. This puts startups in Australia at a critical disadvantage during the early years, when they aren’t really making much money, but are paying what they make to the government.

The high cost of Electricity is an issue (Australia has one of the highest electricity rates in the Western World) if you are running a lot of high tech electronic equipment – especially if you also need to run an air conditioner, to keep it all from overheating.

The high cost of fuel is also a critical issue. While fuel has come down in price recently, a substantial cut to government taxes on fuel would make a significant difference to business activity. Even in this high tech age, I spend a lot of my time driving to conferences to network and meet potential clients.

It remains to be seen whether anything concrete will come of well meaning by often misguided attempts to create a better environment for startups and innovators – but at least politicians are thinking about it, and appear to recognise that fostering business is a priority for kickstarting domestic economic growth.

Today The Register, a major tech website, published news that China has discontinued its efforts to develop a Red Chinese rival to Microsoft Windows, Red Flag Linux. China loves Microsoft Windows XP so much, even Chinese government departments refused to give up their Microsoft Desktops, despite widely publicised suspicions that the USA uses hidden back doors in Microsoft Windows to spy on rivals.

The Chinese alternative to Microsoft was to be based on Linux. Linux is a terrific operating system. Linux is the dominant operating system in much of the server market. I use Linux extensively – when I am creating web technology server components for iPhone Apps and Android Apps.

However Linux never really made it as a desktop operating system. Outside of a few geeks, most people use Microsoft Windows or Mac computers. Linux never attracted a critical mass of desktop applications.

Or did it? There is a branch of Linux which did make it to the mass market – Android OS. All Android phones run Linux under the hood.

But Android is a phone operating system – what has this got to do with desktop computers?

It turns out that efforts are already underway to create a desktop version of Android. Android apps are very adaptable – they are designed to work on a wide variety of devices, with a huge variation in screen size. So making an app work on a desktop is not a big stretch – a small desktop monitor has a similar screen size to the largest Android pad devices.

Whether Android makes it on the desktop is still an open question – but unlike all previous attempts to displace Microsoft Windows, Android already has a very large, loyal following. Many people use Microsoft on their desktop, but have an Android phone, and love their Android Apps. The battle between Android and Microsoft for ownership of the desktop promises to be a popcorn event, rather than yet another Microsoft slam dunk.

So my advice to China – if you want independence from Windows, and the confidence of being able to examine and inspect every line of the code you are using, the solution may be right under your nose. Take a look at Android.

Governments across the world are slowly waking up to the fact there aren’t going to be many jobs in the future which don’t involve a computer, or, given the pace of Robotics research, there might not be many jobs at all.

In response to this looming crisis, the UK government has decided to introduce mandatory software development lessons for all school children.

The problem is twofold:-

The tragedy is this desire to teach kids coding skills is motivated by a genuine concern for the future welfare and job prospects of the nation’s school children.

My suggestions might not solve the looming future jobs crisis – but forcing kids to study something they can’t stand is not a solution either. In any case, there is reason to be optimistic about the future – many issues which in the past were seen as an urgent crisis rapidly solved themselves. Human ingenuity will solve this problem, just as it solved all the other problems we have ever encountered.

If you would like to know more about how to develop Android apps and iPhone apps, or would like to discuss an app idea, please contact Eric Worrall.

If your app idea is not quite ready to go to a developer, please visit Apps Nursery, for expert assistance with exploring and developing your app idea.