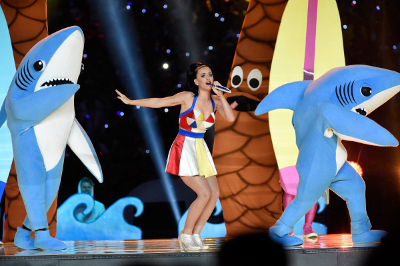 Katy Perry has commissioned the development of a new mobile game, from the same developers who created the “Kim Kardashian: Hollywood” game.

According to Business Insider Australia;

The new game, which has yet to given an official title, will feature Perry’s voice and likeness and promises to “introduce players to a digital playground of global success and talent,” according to the press release.

“Kim Kardashian: Hollywood” was also a free-to-play game, but the game offered in-app purchases that allowed players to use real money to purchase additional playing time and virtual clothes with the game’s currency, “K-stars.”

The strategy worked well for Glu Mobile and Kardashian. “Kim Kardashian: Hollywood” dominated the Apple App Store charts, peaking at the #1 overall spot and #4 in top-grossing apps. It raked in $US1.6 million in its first five days on the market, and has since been downloaded 22.8 million times, generating $US43 million in revenue from its June launch through the end of September.

Creating a mobile app is an obvious merchandising dimension for already famous hollywood stars, especially given spectacular successes like the multi-million dollar Kardashian mobile app. However, mobile apps often succeed without backing from famous people. But what about the reverse – could a successful mobile app help someone break into hollywood?.

Could a mobile app be your big break in a Hollywood acting career?

To some extent we’ve already seen at least one example of this – the blockbuster Angry Birds mobile app has spawned, among other things, its own cartoon franchise.

But imagine a game based on a copyrighted Sacha Baron Cohen character such as the dictator of the fictional nation of Wadiya. In principle the mobile app could help drive the rise in popularity of the character – just as Angry Birds spawned a cartoon franchise, so a successful mobile app could spawn demand for a movie franchise.

Crazy? Impossible? Well it has already happened – not with a mobile app (as far as I know), but with the blockbuster console game Halo. The game created demand for a movie – Halo: Helljumper, released in 2010.